In the song Levelland, James McMurtry wonders why the city fathers of that West Texas town decided to put the town where it is.

Flatter than a table top
Makes you wonder why they stopped here
Wagon must have lost a wheel
Or they lacked ambition.

We’ve often pondered related questions as we’ve driven from town to town on our journeys.  Why is Hattiesburg MS there?  How did Frankfort KY come to be?  And why is Liberal, KS where it is?  (And why, come to think of it, is it named that?  But names are a whole other blog post…)

The topic arose again as we sat down to dinner in Columbus GA last month.

“This is a bigger town than I expected,” Mike said.  “I wonder why it’s here.”

“Well, there’s a river,” I said, having reviewed maps of the area while scouting dinner locations.  “Maybe it’s on the Fall Line.”

“Oh, that’s where you’re supposed to point your body when skiing,” Paul said.  I live in Utah, so Paul assumes all my commentary pertains in some way to skiing.  “What does that have to do with Georgia?”

“Not the skiing Fall Line, the river Fall Line.”

I spent much of dinner explaining 18th century transportation technologies.  Turns out that if you wanted to get bushels of grain or loads of lumber to market, the cheapest way to do it was by boat.  Rivers were really important transportation arteries as a result, but one problem with rivers is that as you proceed inland from the sea, eventually you’re going to hit a point where the river is no longer navigable.  Suppose you’re headed downstream with a big stack of beaver pelts.  You’re cruising along, making good time, and — bam — you hit a waterfall.  Stop.  Unload. Hand-carry your cargo around the falls.  Reload, probably onto a different boat.  Continue.

So now imagine the location around the waterfall.  People getting off their boats for the first time in hours, tramping around, hauling stuff…  What a great place to put a trading house.  Or a hotel.  A bar and a bank.  And even a mill.  (Fall Line cities had the extra advantage of providing hydro power for milling.)  And just like that, you’ve got entrepreneurs creating a city.  The waterfall was the freeway exit ramp of its day, and it’s no surprise that the first inland cities in the European settlement of America were along a north-south line — the line where you hit the first waterfall on each of a number of east-flowing rivers.   Albany NY is on the Fall Line at the Hudson River.  Philadelphia is on the Schuylkill River, Trenton on the Delware, Richmond VA on the James River, etc. 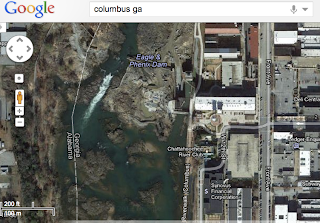 My speculation about Columbus, it turns out, was correct.  (Unlike some people’s driving directions.)  Columbus GA is a Fall Line city, on the Chattahoochee River, and you can see the rocky falls in satellite photos (like the one attached) to this day.

How’s all this related to small business?  A big part of the story for why the Fall Line was so important to settlement patterns and urban growth is that these locations created good opportunities for entrepreneurs.  And if there’s one thing we’ve learned out on the road, it’s that entrepreneurs are relentless in seeking out opportunities.  If the opportunities are on the Fall Line, then that’s where the city will sprout up.  If the opportunities are next to a railway line, then you can count on entrepreneurs to locate there.  If a freeway exit ramp is where the customers are, then you can count on the businesses to be there too.  Contrary to McMurtry’s story about Levelland, cities are almost never where they are because somebody lacked ambition…  quite the opposite, in fact!

The geography of small business is so interesting that we’ve made “Why is this business here?” one of our stock questions when interviewing small businesspeople.   Sometimes geography is important, but other times not.  One insurance company is where it is because the manager’s wife had a good job in the area, and the owners were willing to build the business around the manager’s location.  A sewing firm also chose its location because the owner is a trailing spouse.  But for other firms, locational choices are central to success.  We listened to a trucking firm owner describe with glee the various intersecting interstates in his area.  We’ve heard a manufacturer describe how he shifted production across state lines to take advantage of more favorable labor laws.  The owner of a family-run garden center described in detail his demographic studies of likely gardening demand when deciding where to open a new store.  And a dog day care center, well, it needs to be where the dogs are.